The works of Chiara and Francesco Carraro have found a new home, removed from the Venetian palace, where for years they have served as living presences in their lives, the seal of a successful symbiosis of the couple. Formerly at the center of the personal history of these two extraordinary collectors, going forward the works start living in the museum rooms, preparing themselves for a new role.

In Ca’ Pesaro’s galleries these magnificent works will no longer be in an intimate relationship with the place and the people who have preserved them thus far but are preparing for a daily dialogue with the visitors and with the works exhibited in the other rooms. They will re-emerge and will fulfill a “public” role, designed to shape taste, solicit critical thoughts, and aesthetic views. They become objects of study for new historiographical theories.  Always connected one to the other through a link, which is the passion of collectors who have collected, sought, loved and now brought them here as one single piece, unicum, which the museum intends to exhibit in its permanent collection. The arrival of these more than eighty works makes it easy to ask why an institution, which holds an important artistic heritage, decides to add to its collections a group of works on long-term deposit, albeit of exceptional quality, such as those of Francesco and Chiara Carraro. It is a question that needs to be answered.

Primarily, one cannot deny that every acquisition constitutes for the museum, whatever the museum, a sort of rebirth. There is nothing more relevant to help to realize good projects and strengthening of the museum's instructive and educational ability, than the increase of its permanent collections. No exhibition, no matter how beautiful and important it is can create a continuous critical dialogue as a collection, when growing and opening to new research areas. The meaning of the museum certainly lays in the things it creates, but above all in its collections. Collections are concrete signs of evolution, the source of its appeal to the public, its ability to set itself as a place of study and research, an expression of its ability to entertain virtuous relationships with the community and, in a broader sense, with the world of art. The public, frequently when visiting the museum, certainly likes to find their “beloved” paintings. Those who come to Ca’ Pesaro want to see again Klimt’s Judith II or the superb group sculpted by Rodin, not to mention Medardo and Chagall’s Rabbi No. 2, or of the exceptional canvas, painted with air and lightness, by Sorolla.  They equally appreciate the fact that the museum is growing and improves its holdings. And by doing so opens to new critical perspectives, conquers new territories of research and even instills the confidence of its usual visitors to such a degree that, as in this case, it becomes a place chosen by some to assign their collection to public enjoyment.

We are in fact not only facing a collection in line with the taste of Italian painting of the first part of the Twentieth century shown at Ca’ Pesaro, but also a quality that in many cases surpasses the works of the artists already presented in the museum’s galleries

This eventuality seems very precious in the case of Ca’ Pesaro, International Gallery of Modern Art.  The museum, since the Seventies, has not been able to increase its collection of art with new purchases. The exception comes from gifts given by individual artists or other deposits, but none so extraordinarily consistent with the museum’s mission as Fondazione Chiara and Francesco Carraro’s collection.

We are in fact not only facing a collection in line with the taste of Italian painting of the first part of the Twentieth century shown at Ca’ Pesaro, but also a quality that in many cases surpasses the works of the artists already presented in the museum’s galleries.  This is the case of the two Still-life by Giorgio Morandi, one of 1947 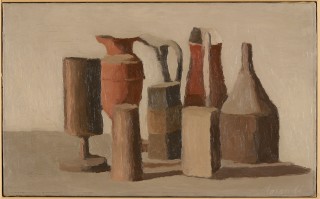 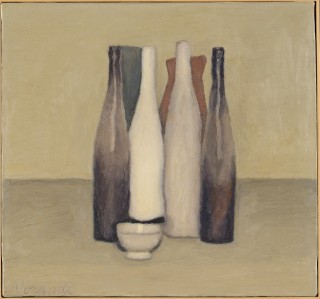 , or of the de Chirico, The Night of Pericles 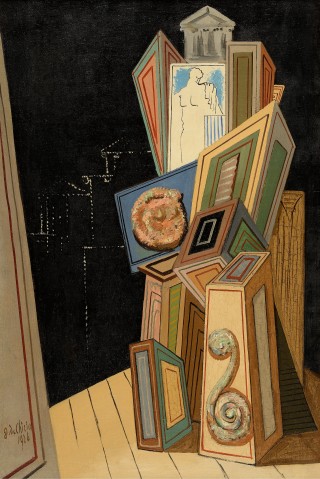 (1926), with geometric figures still echoing his metaphysical compositions, or even three masterpieces by Antonio Donghi, the most effective narrator of Italian magical realism. Wildt and Martini's sculptures are also competing for quality with the superb pieces of Ca' Pesaro. This addition adds to the puzzle of the permanent collection some of the most remarkable works, such as Wildt’s Parsifal 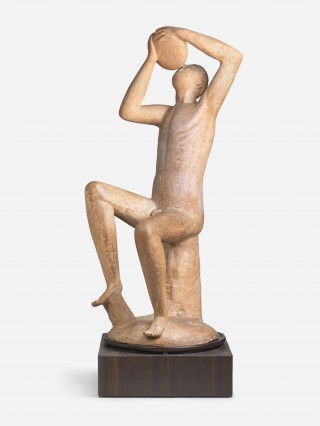 by Arturo Martini, sculptures in dialogue with those exhibited in the previous rooms, as further proof of how these artists were central to the Italian debate of the 1920s and 1930s.

Even the great painting by Gino Severini (an artist entering for the first time in the museum’s collections), the so-called Polittico Garagnani

of 1957, will be a real discovery for Ca' Pesaro's audience, an excellent example of a late creation. It is surprising for the expressed energy, seen in many compositional solutions taken from the best paintings of his Parisian years, between futurism, of which Severini was one of the most brilliant players and that of Braque and Picasso.

If the paintings will impress the audience for the quality and the historical importance, they will be mainly the glasses and the precious, very rare, furniture, to give the visitor the complete sense of the Carraro Collection, which in the combination of sculpture, painting and decorative arts finds its specific identity, its unicum, made of a surprising mix of refined and bold excellence, of early discoveries and of an equally ineffable instinct for beauty in all its artistic expressions. This will be the added value that Carraro Collection will bring to Ca' Pesaro, opening a collecting front, that of the decorative arts precisely, absent in the museum’s galleries, a fascinating account of ancient tales and new crafts, of languages and artistic experiences often left behind with respect to the so called  “visual arts”, that, in the specific case, will again put Venice and the craftsmanship, which grew from the beginning of the Twentieth century up to the early Seventies, in a exceptional and blessed creative season, at the centre of the perspective.

If the paintings will impress the audience for the quality and the historical importance, they will be mainly the glasses and the precious, very rare, furniture, to give the visitor the complete sense of the Carraro Collection.

Those of the so-called decorative arts, of which Chiara and Francesco Carraro have been among the finest Italian collectors, acquiring,  when few people were appreciating this artistic productions, pieces of inestimable value, is perhaps the chapter that will bring more innovation in Ca’ Pesaro’s layout. Thanks to the magnificent Murano glasses from the Collection, signed by the greatest artist of this production, from Zecchin to Barovier, from Martinuzzi to Scarpa, Bianconi to Venini and many more, the visitor's view will discover  a world of skilled craftsmanship and undeniable quality, and will appreciate the role that the city and its islands played during the 1960s in the revival of this particular sector and its fortune in the world. The Carraro Collection tells us much about the revitalization of Murano's glass industry during the last century and Ca’ Pesaro Museum will become a precious showcase of this artistic season in the heart of Venice, in accordance with the planning and programme of Glass Museum.

Thanks to a wonderful collection of refined and rare pieces, the public will be able to learn more about the history of many Murano companies that, helped by the opening in 1932 of the new Padiglione Venezia, which was created at the heart of the Biennale Gardens and was meant to show Italian craftsmanship, glass, textiles, lace and mosaic in particular, challenged with the talent and the virtuosity of the first designers, architects and especially genius glassmasters, the international scene, leading the way in technology, creative dynamism and stylistic innovation, making their products the most precious and most sought-after in the world.

In the spirit of that refined eclecticism that inspired Teodoro Correr and the formation of his extraordinary art collection donated to the City of Venice, today assembled in the Fondazione Musei Civici, we could not be more satisfied about this new important acquisition, which is the concrete example of the trust that citizens still have with regard to the Venetian institutions. Fondazione Musei Civici is therefore nothing but grateful to Chiara and Francesco Carraro Foundation, who chose us as receivers of such beauty and witnesses of a life lived in a close community of intentions and passions, where art was the true, precious link of a bond reinforced in Ca’ Pesaro’s galleries, in line with the precise will that Francesco had thought and dreamed of with Chiara.